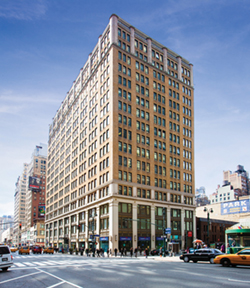 New York, N.Y. - SOSV, a venture capital firm that runs the IndieBio development program for early stage startups in the rapidly growing life sciences sector, has signed a 10-year lease for 24,814 square feet of office, laboratory, and conference space at Seven Penn Plaza. The property is owned and managed by The Feil Organization.

SOSV will occupy the entire ninth floor of the iconic building for its life sciences program, IndieBio. Construction plans call for the buildout of a BSL-2 laboratory, offices, and conference and event space for startups and researchers supported by the firm. SOSV was recently awarded a $25 million grant from the New York State Development Corporation to expand the life sciences sector in New York.

“We are thrilled to welcome SOSV to Seven Penn Plaza, which is home to our own headquarters,” said Jeffrey Feil, CEO of The Feil Organization. “This is not just a typical lease, it’s an investment in a new industry that is making New York a top global technology hub for life sciences.”

According to the New York City Economic Development Corp., total employment in the New York City tech sector has grown 28% since 2014, and the number of tech bootcamps across the five boroughs has more than tripled from seven to 22. Earlier this year, the prestigious Savills Tech Cities Index ranked New York first among 30 cities worldwide due to its vast talent pool, extensive transportation infrastructure, and abundance of venture capital for startups. Many tech companies have opted to locate offices in the Flatiron District, which neighbors Seven Penn Plaza.

SOSV is a global venture capital firm that operates early stage startup development programs: HAX (Shenzhen/Newark/Tokyo/San Francisco) for hardtech, IndieBio (San Francisco and New York) for life sciences, and Cross-Border Internet programs in Shanghai, Taipei, and Boston. The five programs help launch 135 new startups each year with pre-seed investment, expert coaching, and a deep community of mentors. SOSV has more than $1 billion in assets under management, and startups amongst its high-flying portfolio include Notco, Opentrons, Upside Foods, MycoWorks, and BitMEX.

“IndieBio is creating a more fertile ecosystem for early-stage startups, which is especially valuable to the NYC biotech ecosystem,” said Sean O’Sullivan, SOSV’s Managing Partner. “Beyond that, though, this space represents the New York headquarters for the global VC firm SOSV, and an events space to gather the deep-tech community in the heart of Manhattan. It is incredibly exciting for our team to welcome investors, startups, researchers, and corporate partners to such an easily accessible location at the busiest transport hub in the Western Hemisphere.”

SOSV also recently announced plans to establish a major facility in Newark, NJ for the HAX startup program. The proximity of the two programs, just an 18-minute train ride apart, will be a big enhancement for founders in both locations, due to the overlap in missions focused in part on health and climate tech.

Inquiries should be directed to David Turino, director of commercial leasing at The Feil Organization at 212-609-8658 dturino@feilorg.com