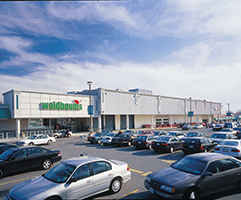 New York, NY – March 17, 2015  Update the look, update the tenants: After a major renovation of the center’s façade, a combination of Burger King and Popeye’s Restaurant will add much-needed dining options to Concourse Plaza Shopping Center in the Bronx this spring, announced The Feil Organization, the building’s owner and manager.

The franchisee will operate both restaurants in the 4,088 square feet leased. Terms were not disclosed for the 10-year agreement. Occupancy is scheduled for this May. Other tenants at Concourse Plaza include CVS, Food Bazaar Supermarket, Payless, and a 10-plex cinema on the lower level, as well as a 10-story office tower whose tenants include the Bronx District Attorney.

“This area is, pun intended, starved for good food options,” says Nicholas Forelli, Director of Leasing for The Feil Organization. “Burger King and Popeye’s are a perfect fit to meet the needs of those working at and visiting the Bronx County Courthouses across the street, Yankees Stadium up the block and the 210,000 people living within one mile of the center.”

The deals are a testament to the importance of maintaining and upgrading a property, Forelli adds. A major façade renovation is 95 percent complete, and demand is rising at the property as a result, he says. Only two specialty shop spaces of 2,600 square feet and a 24,000-square-foot junior anchor space still available.

Located at East 161st Street and Grand Concourse (the major north-south thoroughfare connecting the Bronx with Manhattan), the 311,650-square-foot Concourse Plaza is also adjacent to a 1,883-unit residential housing community.

Built in 1990, Concourse Plaza Shopping Center can be accessed by various subway and bus lines, and boasts parking that can accommodate more than 1,200 cars.

Forelli represented Feil in the transaction. Burger King and Popeye’s were represented in-house.

ABOUT FEIL
The Feil Organization is a private, established commercial real estate firm headquartered in New York City. A powerful force in real estate for over 60 years, the company owns and operates a nationwide portfolio of over 26 million square feet of retail and commercial space, and over 5,000 residential rental units. The Feil Organization also maintains regional offices in Chicago, New Orleans, St. Petersburg and on Long Island.

Inquiries should be directed to Nicholas Forelli, Director of Leasing at The Feil Organization at 212.279.7600 x275 nforelli@feilorg.com or Randall Briskin, Vice President of Leasing, at 212.563.6557 x213 rbriskin@feilorg.com.