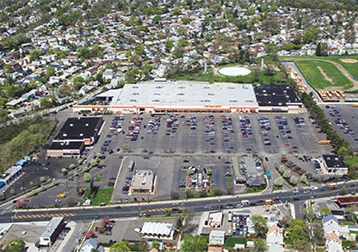 New York, N.Y. - One of the first Target “flexible format” stores on Long Island will become the latest anchor at the Home Depot Shopping Center at 600 Hempstead Turnpike in Elmont, NY, announced The Feil Organization, the building’s owner and manager. Terms were not disclosed.

The 24,500 square foot store will open either late this fall or early spring 2017 in the space formerly occupied by OfficeMax, which is closing eight years early to accommodate Target. This new format for the discount giant varies in size and assortment, allowing it to accommodate smaller footprints and create a more locally relevant experience for shoppers.

“This is a game-changer for the neighborhood,” says Randall Briskin, Vice President of Leasing at Feil. “The new Target concept will better serve the community, bringing the most desirable products of the larger Target concept into a smaller space. It will serve to broaden the merchandise mix of the shopping center as a whole.”

Located just off the Cross Island Parkway, near Belmont Park Racetrack and Adelphi University, the approximately 270,000 square foot center is also anchored by Home Depot and Marshalls. Nearly 347,000 people with an average household income of $98,247 live within a three-mile radius of the center.

ABOUT FEIL
The Feil Organization is a private, established commercial real estate firm headquartered in New York City. A powerful force in real estate for over 60 years, the company owns and operates a nationwide portfolio of over 26 million square feet of retail and commercial space, and over 5,000 residential rental units. The Feil Organization also maintains regional offices in Chicago, New Orleans, St. Petersburg, and on Long Island.