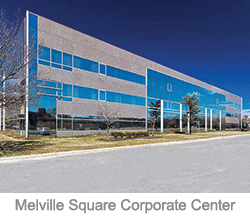 New York, N.Y. - The appeal of Long Island office space, and of The Feil Organization’s properties in Nassau and Suffolk County continues, the company announced. Most recently, Feil has signed a new lease with CohnReznick LLP at Melville Square Corporate Center, located at 1305 Walt Whitman Road in Melville, New York.

“We never really questioned the strength of the Long Island portfolio, which is why we have invested so heavily in the area, as well as in the buildings we’ve acquired. We’re now working closely with CohnReznick to create a beautifully designed space with an expanded footprint and modern finishes througout,” Parlante said. “Our leasing hot streak is based on a lot of hard work and strategic planning. Activity has been constant, and we’re looking to continue these efforts and repeat these successes in all of our buildings — on Long Island and beyond.”

Melville Square Corporate Center located at 1305 Walt Whitman Road consists of three floors and two atria and is ideally situated in the heart of Long Island’s corporate headquarters corridor on the border of Nassau and Suffolk Counties, directly off exit 49 of the Long Island Expressway (Interstate 495). Conveniently situated in one of New York City’s most in-demand suburban areas, the complex is just 30 minutes from LaGuardia, John F. Kennedy International, and Islip-MacArthur Airports, and directly across from a full-service Marriott Hotel, and close to Walt Whitman Mall, numerous diverse restaurants, and other retail options on Route 110.

Terms of the CohnReznick transaction were not disclosed. Tim Parlante represented The Feil Organization in the transaction.

Inquiries should be directed to Tim Parlante, Director of Leasing at The Feil Organization at 212-609-8666 tparlante@feilorg.com