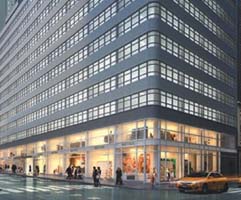 New York, N.Y. - E-commerce driven menswear brand Bonobos has signed a 10-year lease for 1,725 square feet on the ground floor of The Feil Organization’s 488 Madison Avenue, extending the apparel selection in one of the world’s most famous shopping districts. Feil recently completed major renovations at the building, which include a new glass curtain wall on the ground and second floor along with a fully upgraded office lobby.

“This area of Madison Avenue is home to various menswear tenants along with online retailers. The strong co-tenancy and highly desirable area of Madison Avenue as a renowned shopping destination made for the perfect opportunity for Bonobos,"said Nicholas Forelli, Director of Leasing at Feil. Forelli and Feil Vice President of Leasing Randall Briskin represented the landlord; Justin Fantasia of RKF represented the tenant.

Bonobos stores, called Guideshops, serve as a highly personal extension of the brand’s comprehensive customer service for those who want to see and try on the clothing in-person before placing an order online. The order then is shipped to their location of choice 1-7 business days later.

Once known as the “Look” building for the iconic magazine, the 23-story, 447,000-square-foot 488 Madison recently completed a multimillion-dollar renovation of the lobby and glass curtain wall, repositioning the retail for the entire blockfront. Feil also is in negotiations with a fast casual Mediterranean restaurant to occupy street level retail space fronting 52nd Street. Additional boutique availabilities range from 684 square feet to a three-level flagship location of more than 6,600 square feet.

"The activity at this building has been exceptional as of late. With these two tenants moving forward, the building’s remaining retail spaces will not be available for long,” Forelli said.

ABOUT FEIL
The Feil Organization is a private, established commercial real estate firm headquartered in New York City. A powerful force in real estate for over 60 years, the company owns and operates a nationwide portfolio of over 26 million square feet of retail and commercial space, and over 5,000 residential rental units. The Feil Organization also maintains regional offices in Chicago, New Orleans, St. Petersburg, FL, and on Long Island.

ABOUT BONOBOS
Bonobos is a clothing brand focused on delivering great fit, excellent customer experience, and a fun approach to menswear. Launched online in 2007 with its signature line of better-fitting men's pants, Bonobos is now the largest apparel brand ever built on the web in the United States, offering a full menswear assortment. In 2011 Bonobos pioneered the innovative offline concept, launching Bonobos Guideshops, e-commerce stores that deliver personalized, one-to-one service to those wanting to experience the brand in person. To date, Bonobos has 22 Guideshops across the United States. In 2012, Bonobos expanded its distribution partnering with Nordstrom, bringing Bonobos apparel into all 118-doors nationwide and to Nordstrom.com. Bonobos was named “One of America’s Hottest Brands” by Advertising Age, “Best Men’s Pants” by New York Magazine, and was twice awarded Crain’s “Best Places to Work in New York City”. Visit www.bonobos.com.